Cover Me: The Stories Behind the Greatest Cover Songs of All Time

From the creator of the popular website covermesongs.com comes the perfect book for music fans: the inside stories behind 20 iconic cover songs and the artists who turned them into classics.

A great cover only makes a song stronger. Jimi Hendrixs version of Bob Dylans All Along the Watchtower. The Beatles rocking out with Twist and Shout. Aretha Franklin demanding Respect. Without covers, the world would have lost many unforgettable performances. This is the first book to explore the most iconic covers ever, from Elviss Hound Dog and Joe Cocker's With a Little Help from My Friends to the Talking Heads Take Me to the River and Adeles Make You Feel My Love. Written by the founder of the website covermesongs.com, each of the 19 chapters investigates the origins of a classic coverand uses it as a framework to tell the larger story of how cover songs have evolved over the decades. Cover Me is packed with insight, photography, and music history. 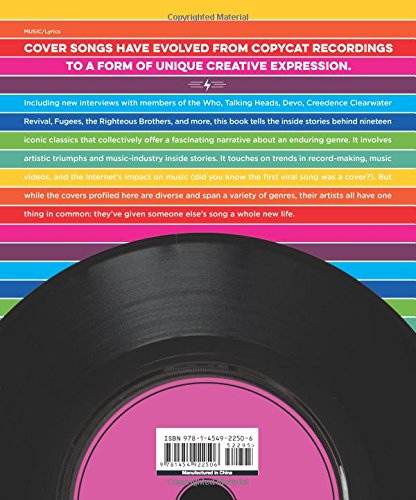 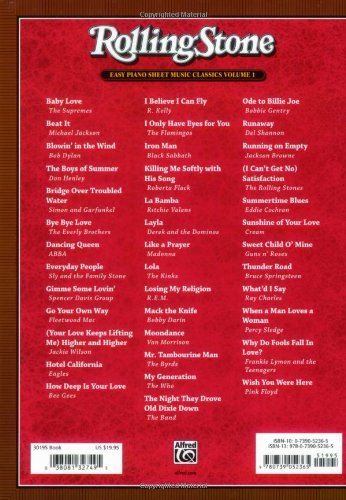 Thirty-nine of the best songs, all chosen from Rolling Stone magazine's 500 Greatest Songs of All Time list. Fingering, lyrics, and chord symbols are included in these easy piano arrangements by Dan Coates. Titles: Baby Love (The Supremes) * Beat It (Michael Jackson) * Blowin' in the Wind (Bob Dylan) * The Boys of Summer (Don Henley) * Bridge Over Troubled Water (Simon and Garfunkel) * Bye Bye Love (The Everly Brothers) * Dancing Queen (ABBA) * Everyday People (Sly and the Family Stone) * Gimme Some Lovin' (Spencer Davis Group) * Go Your Own Way (Fleetwood Mac) * (Your Love Keeps Lifting Me) Higher and Higher (Jackie Wilson) * Hotel California (Eagles) * How Deep Is Your Love (Bee Gees) * I Believe I Can Fly (R. Kelly) * I Only Have Eyes for You (The Flamingos) * Iron Man (Black Sabbath) * Killing Me Softly with His Song (Roberta Flack) * La Bamba (Ritchie Valens) * Layla (Derek and the Dominos) * Like a Prayer (Madonna) * Lola (The Kinks) * Losing My Religion (R.E.M.) * Mack the Knife (Bobby Darin) * Moondance (Van Morrison) * Mr. Tambourine Man (The Byrds) * My Generation (The Who) * The Night They Drove Old Dixie Down (The Band) * Ode to Billie Joe (Bobbie Gentry) * Runaway (Del Shannon) * Running on Empty (Jackson Browne) * (I Can't Get No) Satisfaction (The Rolling Stones) * Summertime Blues (Eddie Cochran) * Sunshine of Your Love (Cream) * Sweet Child o' Mine (Guns n' Roses) * Thunder Road (Bruce Springsteen) * What'd I Say (Ray Charles) * When a Man Loves a Woman (Percy Sledge) * Why Do Fools Fall in Love? (Frankie Lymon and the Teenagers) * Wish You Were Here (Pink Floyd). 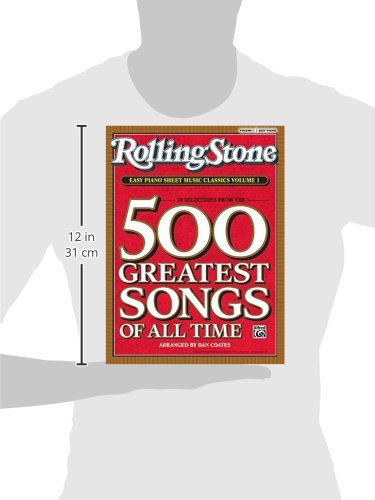 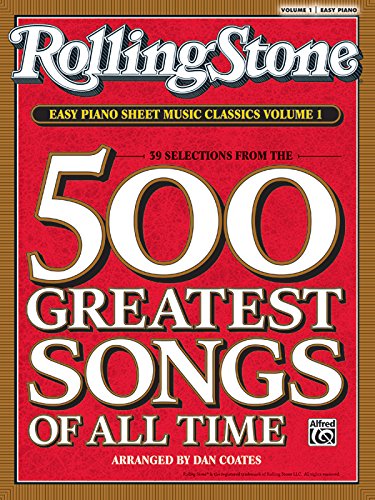 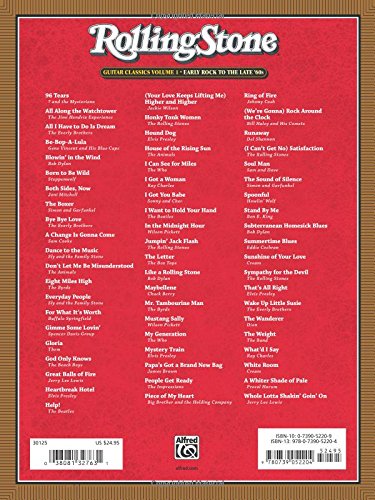 Sixty-one of the best songs of the rock era, all chosen from Rolling Stone(R) magazine's "500 Greatest Songs of All Time." The book covers 61 classic songs spanning 1954 to the late 1960s all arranged to include all important guitar parts and yet remain easily playable.

Songs include: 96 Tears * All Along the Watchtower * All I Have to Do Is Dream * Be-Bop-A-Lula * Blowin' in the Wind * Born to Be Wild * Both Sides, Now * The Boxer * Bye Bye Love * A Change Is Gonna Come * Dance to the Music * Don't Let Me Be Misunderstood * Eight Miles High * Everyday People * For What It's Worth * Gimme Some Lovin' * Gloria * God Only Knows * Great Balls of Fire * Heartbreak Hotel * Help! * Higher and Higher * Honky Tonk Women * Hound Dog * House of the Rising Sun * I Can See for Miles * I Got a Woman * I Got You Babe * I Want to Hold Your Hand * In the Midnight Hour * Jumpin' Jack Flash * The Letter * Like a Rolling Stone * Maybellene * Mr. Tambourine Man * Mustang Sally * My Generation * Mystery Train * Papa's Got a Brand New Bag * People Get Ready * Piece of My Heart * Ring of Fire * Rock Around the Clock * Runaway * Satisfaction * Soul Man * The Sound of Silence * Spoonful * Stand By Me * Subterranean Homesick Blues * Summertime Blues * Sunshine of Your Love * Sympathy for the Devil * That's All Right * Wake Up Little Susie * The Wanderer * The Weight * What'd I Say * White Room * A Whiter Shade of Pale * Whole Lotta Shakin' Goin On. 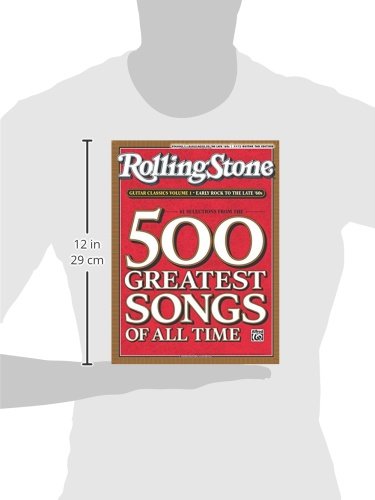 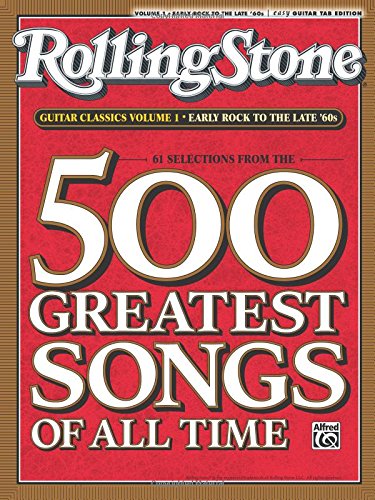 Sixty-seven of the best songs of the rock era, all chosen from Rolling Stone(R) magazine's "500 Greatest Songs of All Time." The book covers 67 classic songs spanning the classic rock era to the modern rock era all arranged to include all important guitar parts and yet remain easily playable.

Songs Include: Alison * Another Brick in the Wall Part 2 * Back in Black * Bad Moon Rising * Beat It * Billie Jean * Bitter Sweet Symphony * Bizarre Love Triangle * Black Dog * Blitzkrieg Bop * Born in the U.S.A. * Born to Run * The Boys of Summer * Brown Sugar * Come Together * Comfortably Numb * Fake Plastic Trees * Family Affair * Fast Car * Get Up (I Feel Like Being a) Sex Machine * Gimme Shelter * Go Your Own Way * God Save the Queen * Good Times * Graceland * Heartbreaker * Highway to Hell * Hotel California * I Wanna Be Sedated * Into the Mystic * Iron Man * Kashmir * Knocking on Heaven's Door * Layla * Like a Prayer * Lola * London Calling * Losing My Religion * Lust for Life * Maggie May * Moondance * No Woman, No Cry * Paradise City * Paranoid * Paranoid Android * (What's So Funny 'Bout) Peace Love and Understanding? * Personality Crisis * Radio Free Europe * (Don't Fear) the Reaper * Respect * Sheena Is a Punk Rocker * Should I Stay or Should I Go * Spirit in the Sky * Stairway to Heaven * Stayin' Alive * Sweet Child O' Mine * Tangled Up in Blue * Thank You (Falettinme Be Mice Elf Agin) * Thunder Road * Walk on the Wild Side * Welcome to the Jungle * What's Going On * Whipping Post * Whole Lotta Love * Wild Horses * Wish You Were Here * You Can't Always Get What You Want. 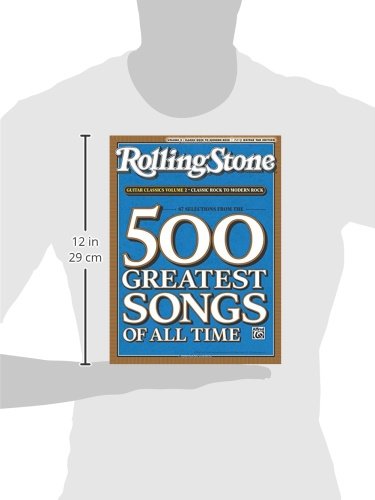 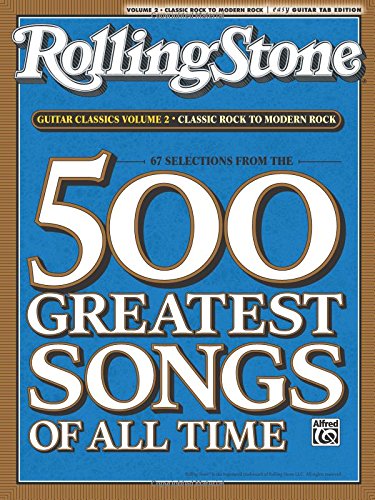 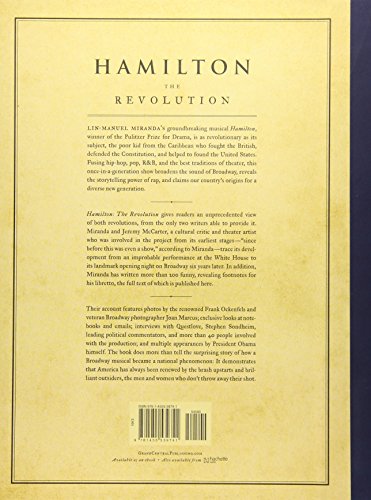 A backstage pass to the groundbreaking, hit musical Hamilton, winner of the 2016 Pulitzer Prize for Drama and Eleven Tony Awards, including Best Musical, including the award-winning libretto, behind-the-scenes photos and interviews, and exclusive footnotes from composer-lyricist-star Lin-Manuel Miranda.

Lin-Manuel Miranda's groundbreaking musical Hamilton is as revolutionary as its subject, the poor kid from the Caribbean who fought the British, defended the Constitution, and helped to found the United States. Fusing hip-hop, pop, R&B, and the best traditions of theater, this once-in-a-generation show broadens the sound of Broadway, reveals the storytelling power of rap, and claims our country's origins for a diverse new generation.

HAMILTON: THE REVOLUTION gives readers an unprecedented view of both revolutions, from the only two writers able to provide it. Miranda, along with Jeremy McCarter, a cultural critic and theater artist who was involved in the project from its earliest stages--"since before this was even a show," according to Miranda--traces its development from an improbable performance at the White House to its landmark opening night on Broadway six years later. In addition, Miranda has written more than 200 funny, revealing footnotes for his award-winning libretto, the full text of which is published here.

Their account features photos by the renowned Frank Ockenfels and veteran Broadway photographer, Joan Marcus; exclusive looks at notebooks and emails; interviews with Questlove, Stephen Sondheim, leading political commentators, and more than 50 people involved with the production; and multiple appearances by President Obama himself. The book does more than tell the surprising story of how a Broadway musical became a national phenomenon: It demonstrates that America has always been renewed by the brash upstarts and brilliant outsiders, the men and women who don't throw away their shot. 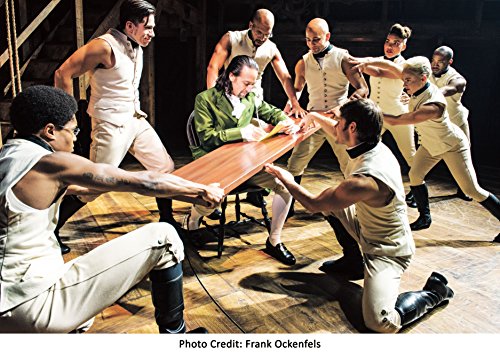 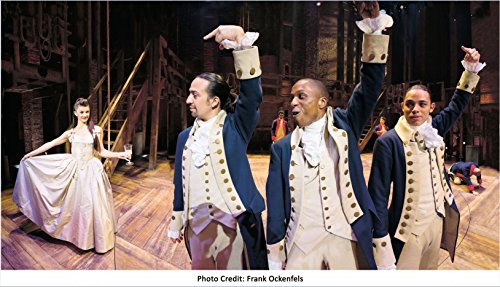 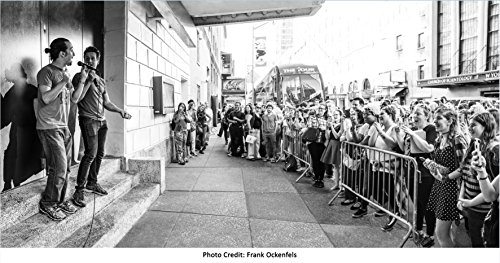 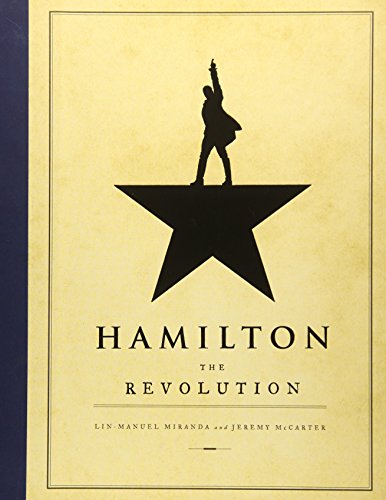 Bob Dylan: All the Songs - the Story Behind Every Track 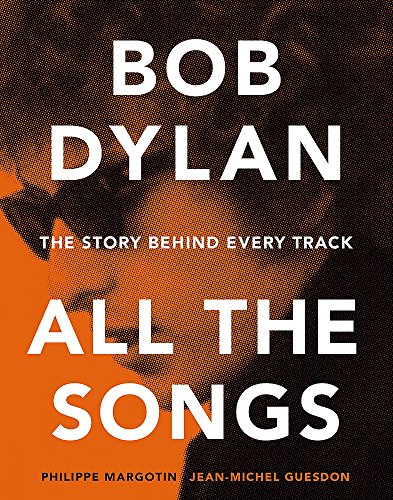 All the Songs is the most comprehensive exploration of Bob Dylan's Nobel Prize-winning music and lyrics yet, with the behind-the-scenes look at the studio recording session, album, and every single released during his remarkable 50 year career.

This New York Times-bestselling, definitive book captures in words and photos Dylan's creative process and his organic, unencumbered style of recording. Packed with stories, many unfamiliar even to his most fervent fans, Bob Dylan All the Songs profiles his 492 released songs. Organized chronologically by album, Margotin and Guesdon recount the inspiration behind Dylan's recorded songs, what went on in the recording studio, what instruments he used, and behind-the-scenes account of the great artists who worked with Dylan. Lyrics and accounts of the recording sessions are accompanied by classic photos, both in and out of the studio, to create a true Dylan treasury.

Bob Dylan: All the Songs is the comprehensive record of the singer-songwriter's career which defined an era and delighted fans for more than 50 years. 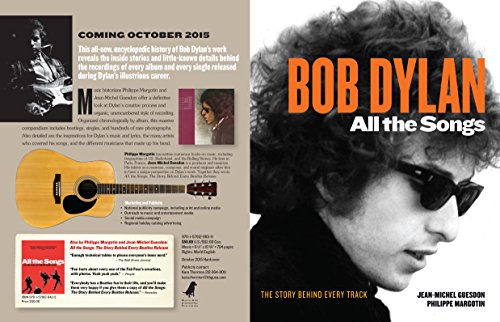 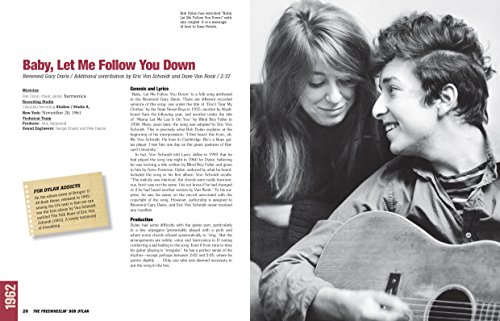 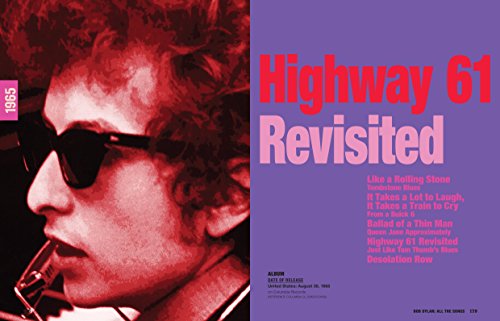 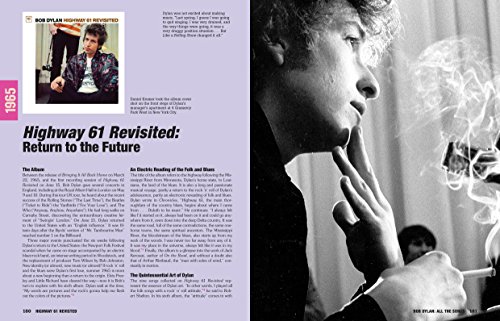 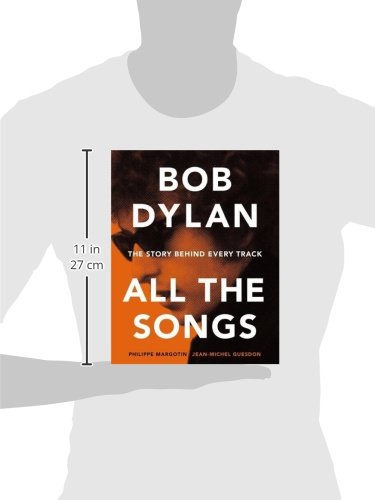 To All the Boys I've Loved Before

To All the Boys Ive Loved Before is now a major motion picture streaming on Netflix!

What if all the crushes you ever had found out how you felt about themall at once?

Sixteen-year-old Lara Jean Song keeps her love letters in a hatbox her mother gave her. They arent love letters that anyone else wrote for her; these are ones shes written. One for every boy shes ever lovedfive in all. When she writes, she pours out her heart and soul and says all the things she would never say in real life, because her letters are for her eyes only. Until the day her secret letters are mailed, and suddenly, Lara Jeans love life goes from imaginary to out of control.